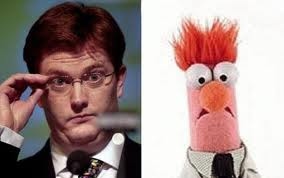 The coalition continues to destroy so much of the good work of the Labour years and lie as they do it.

All over the country colleagues are being prepared for redundancies in Local Authorities and education linked services.

All of this is being directed by a cabinet composed of millionaire tax avoiders. Nick Clegg, Vince Cable and Danny Alexander really should be ashamed. They are loving the limos and the feeling of power but they are being ruthlessly manipulated by Cameron, Osborne and Gove.

In the meantime all the good things that Brown's party espoused are being whittled away. Music for all is disappearing as LA Music Services lose government funding and Council support. New Tech projects disappear and BSF puts school development back 20 years.

Yet I still wish we could argue from principle and not with spite. We know we are right so lets make the point with humour but without personal invective.

Insult Clegg and his lack of principle but avoid the simple insult. Point out Alexander's lack of integrity and inability to explain himself but lets do it by attacking his arguments, not just his intelligence. I want to be part of the discussion not the playground fights. Let's hope the "bloody noses" we inflict are metaphorical.
Posted by alanmills405 at 08:28