#Osbornegump - a millionaire among us 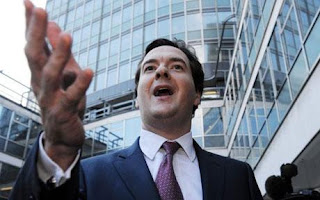 Judging from Twitter, I am not alone in feeling a sense of nausea whenever George Osborne or Michael Gove smile. There is something so sickeningly slimey and crappily confident in the policies they are imposing upon us.

I went to Wikipedia George to learn more about Gideon. Some key details that explain how this man is where he is today.

Osborne is part of the old Anglo-Irish aristocracy, known in Ireland as the Ascendancy. He is the heir to the Osborne baronetcy
Originally named Gideon, he changed his name to George when he was 13. In an interview in July 2005, Osborne said: "It was my small act of rebellion."
Attended Magdalen College at the University of Oxford, where he received a 2:1 in Modern History.
He has an estimated personal fortune of around £4 million, as the beneficiary of a trust fund

So the man who is now in charge of our economic destiny has never had any formal education in economics and never done any work connected to it.
In fact the only connection is that he is a VERY rich man!

So there he sits in a cabinet along with 20 other millionaires and dispenses wisdom. He decides the fate of millions of ordinary people from the comfort zone of his own millions.

So, I started thinking. Who does he remind me of? Nonsense statements wrapped up in sentimental platitudes about the "good old days" ? A hazy view of history?

So forgive the following slight alterations to some Gump quotations.

"My momma always said, "Life was like a box of chocolates.You never know
what you'll get but the rich always get the goodies."

Recruit Officer: Have you given any thought to your future, son? Osborne Gump: "Thought"?

Stupid is as stupid does. (didn't have to change this one!)

Mama always said, dying was a part of life and now I am in charge of the NHS the poor will see it quicker

The coalition's slogan, led by osbornegump, appears to "we're all in this together". Great from a cabinet of 21 millionaires. Don't expect to sit next to them on the bus, queuing with them at the A & E, waiting with them for the teacher at the parents evening or collecting the reduced job seekers allowance.

So I am now pushing for #osbornegump to be Gideon's official hashtag.

Let's all at least try to be heard. "If the baby does not cry or cry out it can die on your back" xhosa proverb
Posted by alanmills405 at 08:03