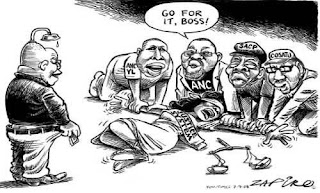 the banned documentary link to video

Lots of stuff in the last few days that gets you worrying about the power of the new government in South Africa. The documentary that has now been banned twice, the threat of legal action over the Zapiro cartoon and the puerile clashes between Zille and Malema.

My point? When I first saw the accompanying cartoon I was shocked and a little chilled. But satire shouldn't be easy. In the UK we had the Spitting Image thing and at first those of us who loved it felt we were being edgy and out there. Then we discovered that some of the Tory politicians portrayed in puppet form wanted to buy the rubber version!

Zuma seems to be working hard to reassure people that he is really working for all. Threatening to take Zapiro to court does him no favours. And Malema!
Posted by alanmills405 at 01:50