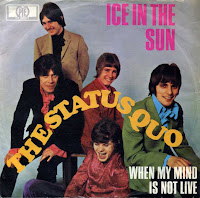 Back in the seventies, I had a year off my studies to be President of the Goldsmiths Student Union. Previously, I had been the Social Secretary and had a wonderful year indulging myself with strange bookings for big events (2000 capacity) and smaller ones for a few hundred. Some of the LPs the companies sent to me cause supercilious sniggers even now. The Pink Fairies debut album, anyone?

I tried all nighters with a staggering range of acts that included people like Mungo Jerry on the same bill as Lindisfarne and various heavy metal bands. Some worked fantastically but to this day I still shudder at the image of the night Status Quo and John Martyn shared a stage. John was near to tears as his gentle set was ruined by the jeers of SQ fans who wouldn't listen to anything that didn't have the same riff in every song.

When I took over as President there was an incredible range of issues on the table for the NUS. Grants, creche facilities, accommodation, Gay Rights, Fights against the National Front and many others. Within the student council I tried to organise we had every shade of student politics, SWP, Tory and even one NF man. Full union meetings were a circus which I tried to organise without the whip.

I soon realised that politically I had a lot to learn. Whatever I tried to do, someone would tell me I was fighting on the wrong side. On one occasion, clear directions from NUS meant although I could speak against him, I couldn't stop the NF guy speaking. Unfortunately he was a damn good speaker. He loved the fact that I had allowed him to speak and made a great show of thanking me. Next day a very edited version of our debate was in the Daily Telegraph, making it seem as if I had supported the NF line, rather than one person's permission to speak.

I tried to get them to print a retraction. Instead a conversation I had with the education editor was misreported yet again.

I learnt as President that socialist arguments are never listened to by right wing media and that Status Quo fans are too stuck in the past to listen to anything that challenges their viewpoint.
Posted by alanmills405 at 03:07