Remembering Racism in South Africa (and so much more) 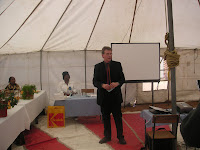 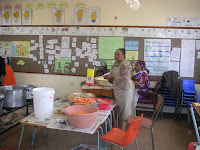 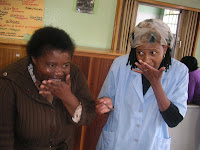 An article by Victor Dlamini (link at bottom) reminded me of the privileges accorded to me as a visitor during my time working for a Charity in South Africa.

Between 2003 and 2008 I worked supporting the introduction of new technologies to the "formerly disadvantaged schools". In inverted commas because for most "formerly" was entirely the wrong word. The key initiative I worked with is a wonderful organisation that produced outcomes envied across the world and I have written in many places of our partnership work. As a visitor who spent 1/3 of the year in Africa, I was able to benefit from many advantages. The exchange rate only one of them. However, as recently reported in Trip Advisor, South Africa is one of the friendliest places on earth.

I worked with schools in many different communities across wealth and racial divides. The coloured community, which still describes itself this way, faces as many problems as the Xhosa. Schools are still poorly equipped and lacking the resources that many take for granted. I also worked with schools that were still largely white and when I visited often reminded me of visits I have made to Eton! Fantastic grounds and buildings, rowing teams and swimming pools.

I worked especially closely with some Xhosa schools in Guguletu and Khayelitsha. I loved the enthusiasm and warmth of the staff who were sometimes teaching classes of 50 learners. On several memorable occasions I took classes in ICT or Maths, speaking English to students who need that language for school work but went home to speak isiXhosa. 50 kids or more stretches ability and patience. In my attempts to be part of these groups I tried to involve myself in all aspects of school life. I managed to secure over £1/2m of support, product and sponsorship for schools here.

I was asked to formally open one school's ICT Lab on a blazingly hot Cape Town day, in a large tent erected just for that purpose. This was a big event for the whole local community and many were invited and turned up for hours of celebration, talks by education officials, local politicians and me! I went for a celebratory meal with the whole of the staff a few days earlier. It was then that they explained to me that they were expecting several hundred guests and they would be providing lunch, all cooked by the staff themselves. Chicken, pap, steamed bread, tripe, spinach etc. prepared on school grounds and on portable gas cookers. I couldn't resist! To their astonishment I said I wanted to help. They tried to tell me as the main guest, I shouldn't but agreed it would be original. Only condition, it was customary to bring a knife.

Two days later I was collected at my central Cape Town hotel at 4.30 in the morning. The early morning ride round Khayelitsha collecting some teachers without their own transport, being handed mugs of tea and various breakfast foods at every house was one I shall never forget. Not least because my "driver" was the young ICT technician who had rigged the biggest stereo system in his boot and decided that the time we were together would be my introduction to kwaito.

Arriving at the school by 6am we set to preparing food. They wouldn't trust me with the chicken, so I was set to washing spinach at an outside tap. 5 plastic sacks full of the stuff. I also got to stir the chicken as it stewed in pans.

I was presenting at 12, so I had to get changed into my suit just before, as the other guests arrived. When I emerged, hands clean and freshly scrubbed,the "important people" had arrived. I did my friendly thing and talked to all, practising my very limited isiXhosa and Afrikaans.

At one point, one of the officials, from the coloured community, took me aside. He said he had to warn me about the food. He said it was never a good idea to eat food in these "black schools" as you could never trust it, and that I as a foreigner would probably suffer. He also said that he often pretended to be Muslim, so that he could excuse himself. I am sure he meant well, but this expressed so neatly the lack of understanding between the different communities in the Western Cape.

I told him I had helped prepare the food he was being offered and I could guarantee it's hygiene and the care taken in providing it.

I have been taken many times to restaurants off the beaten track by my best friend in South Africa, the Principal of one of the biggest schools in Southern Africa with over 2000 learners. As part of the coloured community he had been on the stage with Nelson Mandela at one of his first ANC rallies in the Western Cape after his liberation. He took great pleasure taking me into places where as he said, ten years earlier he would have been refused admission. Yet when I started to arrange network meetings for schools wishing to join my schools association, I was always startled when white and black principals from the same area would admit this was the first time they had ever sat and talked.

My principal friend was shocked the first time I took him with me into Khayelitsha to visit a Xhosa school. The communities do not mix on a day to day basis. One Saturday evening colleagues from a Khayelitsha school took me out for a meal and drinks in bars in Guguletu. All of us were middle aged and the looks we got from the youngsters out on the town were of the "look at the oldies" type, rather than look at that Umlungu. Later in the evening we sat in a small informal bar. A group of men drinking with gusto on another table were clearly discussing me. Comments and gestures made that clear. To be honest I was a little worried. My colleagues however, showed no concern. When I asked them what the situation was they patiently explained that most of the men were Heads and teachers from local schools and one of them remembered me from a school visit. Racial sterotyping? Our group suddenly got much larger for the rest of the evening.

I loved my experiences and the people in South Africa. I met people from all communities dedicated to creating a new South Africa, one with opportunities for all.

But the legacy of apartheid still continues to cast a long racist shadow in so many ways.

Ubuntu: "I am what I am because of who we all are."