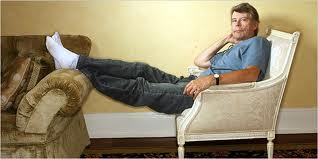 In the nineties I taught ICT in a small mixed comprehensive in Berkshire. Having arrived there from an inner London school, I noticed a lot of differences between the kids from the two areas. If you have ever played Monopoly you will have a notion of the value of the Old Kent Road and lots of the kids who lived there didn't put a much higher value on themselves. My first few weeks in the Berkshire school on the edge of a country town was spent getting used to the accents and them getting used to mine. The country yokel cry of "Please Sir" I really thought was their attempt to take the piss out of my London voice. The willingness to stand up when asked also came as a bit of a shock. These kids were different to the multi cultural environment I had spent the first 17 years of teaching in.

We got used to each other though. One of the things that was exactly the same in both schools, however, was the way in which boys had distinctive tastes in literature and English teachers just couldn't understand it. In my new school most of the English Department was female throughout my time there. Every year when learners chose the novel they were going to read and write their GCSE Book review on, the same problems emerged. Lots of the boys wanted to adopt a Stephen King Horror and most of the staff tried to dissuade them.

There was the underlying feeling that "King was trash" and something more "literary" and appropriate should be selected. In the last few years we have heard a lot about how the Harry Potter books have got kids reading, well 20 years ago I think King did the same thing for teenage boys.

But I have always loved Stephen King's books. I love the ability to tell a story that starts with real life events and real life people that you care about and want to learn about. Rarely do I pick a King book up and not want to keep going until I reach the end of the story. Some of his novels are sensational rubbish but some of them I would seriously place among the best written in the English language. And for anyone who has never picked up one of his stories and has a snobbish view of them, read one: that's a challenge!

I would say Misery, Dorothy Claiborne and Hearts in Atlantis are among the best. The novellas such as Stand By Me and Shawshank, superb.The horror is subsidiary to the suspense and character development in most of his writing.

So to go back to the nineties. I was called to arms! I thought I should take up the cause of the King and argue my point on behalf of all the boys who wanted to do their review of one of his.

When I got my chance to put my case and talk about the language, the writing skills, the story telling ability, I was a bit shocked. At the time I did this, none of the teachers had read any King. It wasn't part of their cultural background. It wasn't what they knew. They had no experience of reading what the people they were responsible for liked or kept them going. They dismissed the aspirations of this group of boys who wanted to read what they wanted to read, not what someone else foisted on them. Hopefully, most of these boys went on to read a much bigger collection of literature but often the set books became hated books because they were made to read them.

I have this relationship with Dickens. Bleak House was my set book at A level. I was told to read it. Never did and still haven't up to this day.

So, a few points there but a wider one. Watched Andrew Neil's Posh and Posher yesterday. Apart from the fact that Mr Neil needs someone to explain to him what Comprehensives really are and do, and that if all the private schools were closed as Labour should have done in 1997 then education for all would be so much better; apart from all that it is pretty damn clear that all the millionaires from Eton and Oxford and Cambridge in the Cabinet have no idea what people in UK are really like.

No idea at all. They don't share our relationship with the world. Osborne needn't worry about cuts, his Trust fund will carry on isolating him. Gove can carry on organising the world so that schools reflect the education he suffered. Because none of them are really linked in to what people really want or see. There is good stuff going on in our communities. Stuff that the millionaires don't see, don't understand and don't care about.

Reminds me of Stephen King and the English teachers.
Posted by alanmills405 at 01:36