The Coalition : the new Marx Brothers? 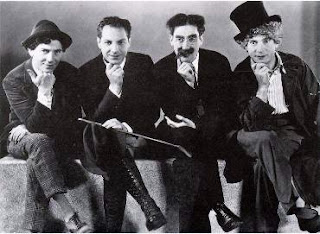 A child of five would understand this. Send someone to fetch a child of five.
Before I speak, I have something important to say.
If you've heard this story before, don't stop me, because I'd like to hear it again.
Groucho Marx

If only there was a real satire programme left on TV. That twerp Hislop is just a bitter and twisted posh twit. I can never forgive him for the constant rudeness and insults to Gordon Brown that went far beyond humour. And Bremner seems to be laying low. Can't he do a Gove impression?

But Gove is crying out to be properly satirised. He is almost his own caricature. His plans for the new curriculum, while saying he intends to Free up teachers through the Free schools, are beyond belief. I was teaching PSE in an inner London comp when Thatcher's government was trying to make "promoting homosexuality" a crime, I just wanted one of them to come to one of my lessons. I only had to mention gay rights in the classroom to provoke the choral response from the boys of "Sir's a poofter". The idea that teachers were promoting homosexuality was ludicrous and born out of the Tory government's complete disclocation from real life.

Gove's plans for poetry seem to be based on his interests and rarefied school experience. Teaching Dryden to 13 years olds? Teaching any poetry is hard enough but stuff with no relevance to a teenager is a recipe for anarchy.

Then there is little Michael's offer to open up unused (and presumably unwanted) DFE offices for new "Free" schools. An old water cooler and dusty desks is not the sort of resource many teachers will see as ideal. What about play areas, sports facilities. dining halls, assembly areas?

And as for Osborne..... a man who has lived on a £4m Trust fund telling real people that their prospects, benefits and aspirations are going to be cut.

Osborne and Gove are the brothers we expected from the Tory club but Clegg and Cable? Didn't we expect a bit more?

OK, we have the evidence that Clegg lied before the election video http://tinyurl.com/y6ld7fg but did they think before they betrayed their party and joined hands with this upper class bunch of clowns?

Groucho said he didn't want to belong to any club that would have him as a member. There's something there for the LibDems to consider. My message to Clegg and Cable is also from the wise words of Groucho...
Next time I see you, remind me not to talk to you.
Posted by alanmills405 at 08:42