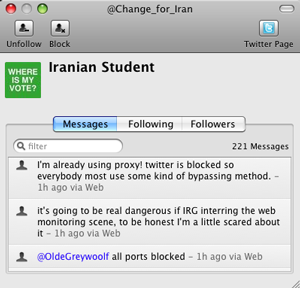 My thoughts about the way the Iranian protests have become a "fashionable" trend.

The problem is we do not know what happened. The young in Tehran who have access to social media do not necessarily reflect the voting population. It is quite possible the election was won by the ruling party.

Similar things happened in South Africa. The people of Cape Town who showed cynicism about Zuma were the minority. He almost won his 2/3 majority because the rural voters supported him. Same in the UK, the vocal and media savvy Londoners may tell the world what the British think but the Celtic outskirts may have views diametrically opposed.

All the green overlays and the urge to retweet could be used to serve some awful causes. There are real examples of the Iranian government assuming Twitter identities and passing on false info.

It worries me intensely that people in the West have adopted the cause in Iran without having a full understanding of the history, the context and the issues.

Just having the ability to use Twitter does not automatically make you the Good Guy.

an interesting blog to read

The Dark Side of Twittering a Revolution BY Jamais Cascio